What is Regenerative Gene Therapy?

"We used to think that our fate was in our stars, but now we know that, in large measure, our fate is in our genes", quotes James Watson, Nobel Laureate. When a gene is abnormal or mutated, various illnesses emerge. Regenerative/Gene therapy is a technique for correcting effects of defective cells and genes that are responsible for disease development.

The burden of genetic diseases :

Children are our future, yet, congenital and hereditary genetic diseases are becoming a significant health burden, and hence there is a need for adequate and effective genetic testing and treatment services. In India’s urban areas, congenital malformations, blindness and genetic disorders are the third most common cause of mortality and morbidity in newborns. An estimated 1 in 3500 male children with Duchenne muscular dystrophy (DMD), 1 in 4000 infants with Retinitis pigmentosa (RP),  495,000 infants with congenital malformations, 390,000 with G6PD deficiency, 21,400 with Down syndrome, 9,000 with β-thalassaemia, 5,200 with sickle cell disease, and 9,760 with amino acid disorders are born each year. The prevalence of late-onset multi-factorial disorders (including coronary artery disease, hypertension and psychiatric disorders) is also large. Apart from this, approximately 0.1% of the population in southern India is suspected to have some form of heritable ocular disorder.

With a very large population and high birth rate and consanguineous marriage favoured in many communities, there is a high prevalence of genetic disorders in children in India. Due to inadequate diagnostic, management and rehabilitation facilities, the burden of these disorders is greater in the third world than in Western countries. For many such diseases, due to lack of drugs, the only recourse for the suffering children is gene therapy of somatic stem cell therapy. Thousands of patients suffer from various genetic disorders that may be treatable by Gene Therapies; millions suffer from cancers that may be treated by gene therapies like Head and Neck Cancer. The principle of gene therapy is to transfer a therapeutic gene using viral or non-viral vectors administered to the eye. Therefore, we have set out a few small goals en route to establishing a state-of-the-art cGMP facility for vector development and production. 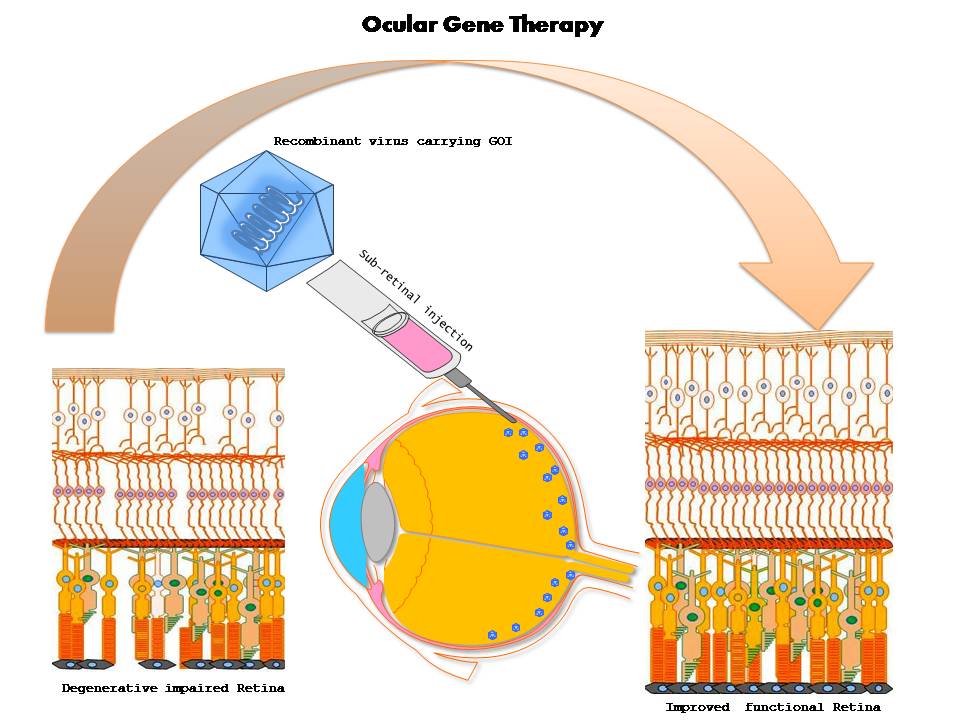 Current status of Gene Therapy; the Eye shows the way:

Learning from initial setbacks, investigators narrowed their targets to rare monogenic disorders and focused on conditions localized to defined anatomic areas, such as the eye and the brain. Most recently, intravenous delivery of an adenovirus-associated virus (AAV) vector expressing human factor IX has resulted in factor IX transgene expression at sufficient levels to improve the bleeding phenotype in six young individuals affected with hemophilia B; the treatment also was safe. This work has helped to reignite the promise of gene therapy for systemic human disease.

The eye, in particular, is an attractive target for gene therapy for several reasons. The eye is one of the few immunologically privileged sites in the body, so the gene vectors used are unlikely to cause a systemic immune response. Given the defined volume of the eye, small amounts of viral vectors may be all that are necessary to achieve therapeutic effects—likely to be a positive for reducing the risk of toxicity and increasing the likelihood of being able to manufacture quantities of vector sufficient to treat the retina. The eye also allows for localized treatment without intravenous delivery, thus decreasing the chance of systemic absorption and toxicity. Finally, the effects of localized ocular treatments can be easily observed and monitored for efficacy and safety, something that cannot be readily done with systemic conditions. With these advantages in using the eye as a target for gene therapy, and the continued understanding of gene mutations and their role in retinal diseases, investigators are actively determining the potential for gene therapy in different conditions (See Table 1).

Historically, gene therapy has been considered a treatment modality used for monogenetic heredodegenerative diseases. For instance, investigators are using gene therapy to target mutations in the RHO gene to halt the progression of retinitis pigmentosa and the MY07A gene in Usher’s syndrome. Animal models suggest that gene therapy can be used to treat diseases such as achromatopsia, Stargardt’s disease and X-linked retinoschisis. There may even be a role for gene therapy in multifactorial degenerative diseases of the retina, like diabetic retinopathy and age-related macular degeneration.

Phase I clinical trials using gene therapy have been initiated for various retinal diseases such as exudative AMD, choroideremia, autosomal recessive RP and Stargardt’s disease.6 Leber’s congenital amaurosis (RPE65 mutation) is currently in advanced development for children, currently being evaluated in a Phase III clinical trial. All but one of these clinical studies uses an adeno-associated viral vector. Adeno-associated viruses are non-pathogenic, small viruses with one single strand of DNA from the parvovirus family. AAV vectors have a low risk of insertional mutagenesis, especially for the post-mitotic tissue such as the retina. These viruses have been shown to insert genetic material into specific sites with a high rate of reproducibility, and human studies have found AAV to persist in humans for more than three and a half years. AAV-vector-mediated gene delivery has been safely used in more than 20 clinical trials for diseases such as Parkinson’s disease, cystic fibrosis and hemophilia. RPE65 is the retinal pigment epithelium-specific 65 kDA protein that is involved in the conversion of all-trans retinol to 11-cis retinal during phototransduction and has been implicated as a genetic defect in Leber’s congenital amaurosis. A team at the University of Pennsylvania first reported success of LCA gene therapy in humans in 2008. They studied the use of a subretinal injection of adeno-associated virus 2 (AAV2) carrying RPE65, delivered during a pars plana vitrectomy. Three- year results from this clinical trial are promising and demonstrate persistent, improved visual function determined by psychophysical testing. There were no systemic safety concerns, and the ocular adverse events that did occur were related to the surgical procedure. Recently, there have been tremendous advances in our understanding of the etiology of AMD in an effort to target treatment to the underlying cause of the disease. Many investigators postulated that the disease is a result of accumulative damage from inflammation, toxic by-products and oxidative damage that lead to destruction of the choroid, RPE and retina. Investigators have been evaluating a variety of ways to treat AMD, ranging from neuroprotection to preserve photoreceptors and the RPE to suppression of the inflammatory cycle via complement inhibitors, glucocorticoids and immunosuppressive agents. However, no gene therapy trials are being held in India and no vector generation facilities are available in the Indian subcontinent.

Recombinant Vectors for Gene Therapy: our expertise with AAV delivery

Though viruses are simple forms of life, they are highly efficient gene delivery machines. Viruses like lentivirus, adenovirus, and adeno-associated virus are commonly used for delivering genes.  There are different mechanisms through which these viruses transport therapeutic genes into target tissues.  There are advantages of using virus vectors for gene delivery like it is efficient and it is effective. But, because the viral carriers are essentially modified pathogens, there are disadvantages like concerns of safety.  Some of the other disadvantages include intense inflammatory immune reactions and the potential for carcinogenic genetic mutation. 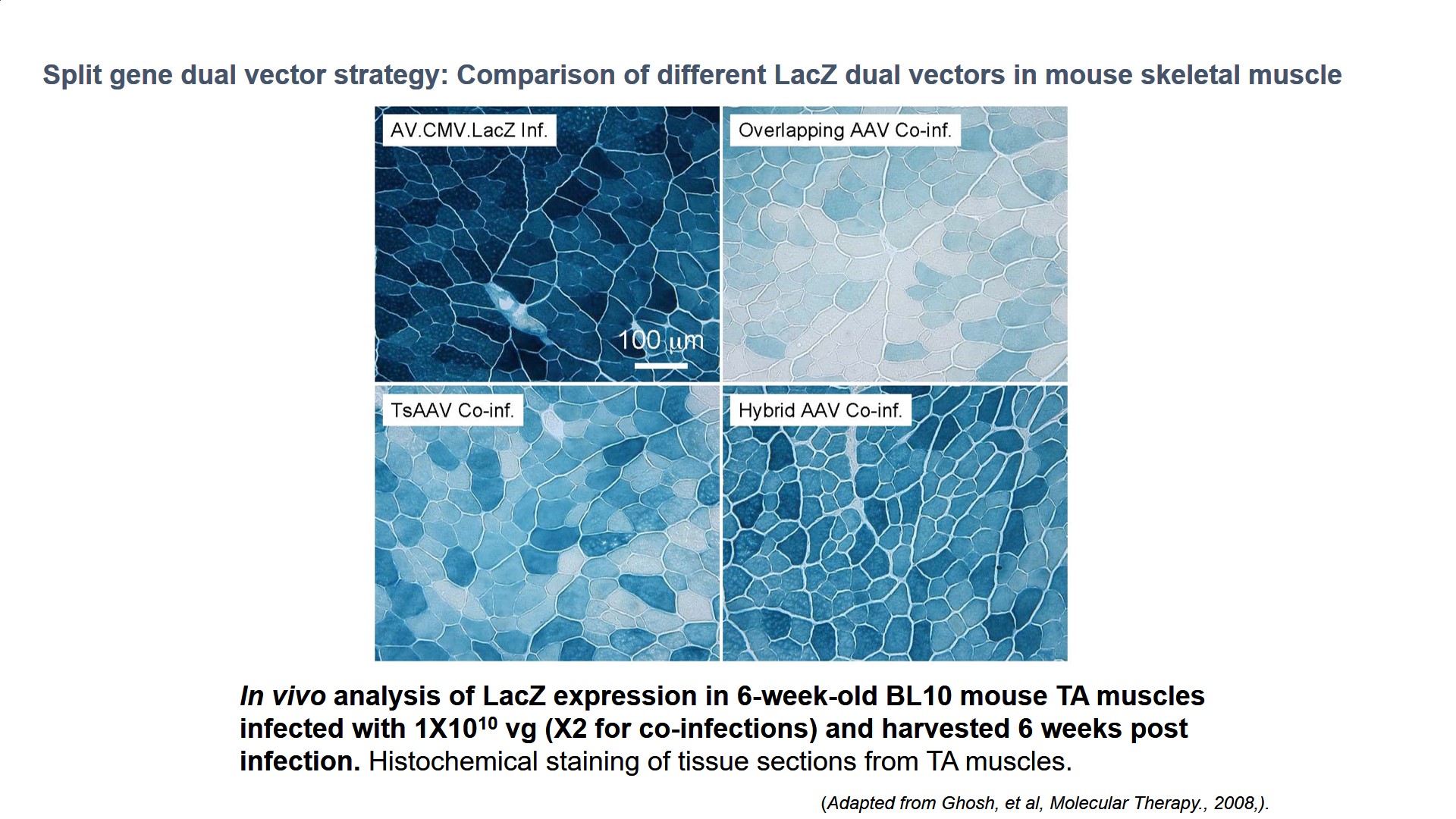 The production of viral vectors

The production of viral vectors is also laborious and requires significant purification to achieve pure, high-titer solution capable of safe transfection.  However, among the utilized viral vectors adeno-associated virus (AAV) has emerged as the most successful and clinically useful vector as evidenced by its recent success in treating multiple disorders including blindness.  AAV is nonpathogenic to humans making it safe for patients, treatment environment, and caregivers. Roughly 10 AAV serotypes have been tested in human tissues and shows great promise.  AAV serotypes have shown a wide range of efficiency in ocular tissue, likely due to the interactions between host-cell receptors and viral capsid, which makes it ideal for targeted transfections. 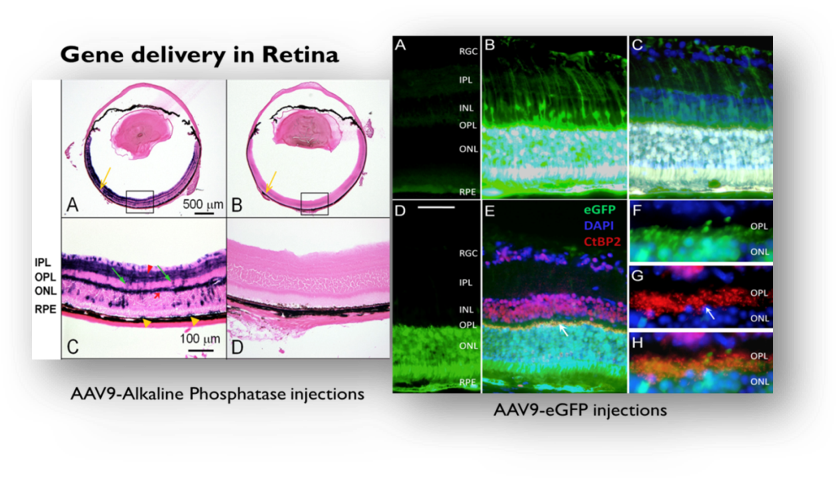 Benefits of the research outcomes

Genetic abnormalities leading to various forms of LCA are a major cause of blindness worldwide (A list of known genes is provided in appendix 1). However, inherited, genetic blinding disorders have been untreatable and the primary role of the ophthalmologist is to provide symptomatic treatment for alleviation of discomforts and provide counseling for the risk to their offspring. The establishment of gene therapy as viable treatment option through the work at various laboratories worldwide has provided hope to many of these patients. Therefore, here at Narayana Nethralaya, this study will evaluate various forms of gene transfer technologies and their efficiencies in human cell culture models and pre-clinical animal models with the goal of establishing a functional therapeutic platform. We hope that this will serve as a precursor to an actual clinical trial for certain forms of LCA. Similarly, we will target the Stargardt’s disease as well. For this, we will use our patented AAV hybrid dual vector system for ABCA4 gene transfer. For gliomas and HNSCC, we are exploring suicide gene therapy strategies for selective killing of rapidly dividing tumor cells; e.g. Diptheria toxin B subunit, HSV-tK, VSV M protein, p53, etc.

Gene therapy has emerged as a treatment tool for many diseases which were untreatable in the past. In gene therapy, viral based system has been most wildly used and explored. Among them, the adeno associated viral vectors (AAV) offer several potential advantages over other viral gene therapy system. Its non-pathogenic, low immunogenic nature and ability to transduce foreign genetic material in a variety of tissue with long term expression has made it the best suitable virus for gene therapy. However, one of the major limitations for using AAV as a gene therapy vector is its low packaging capacity, which is limited to 4.5 to maximum 5kb. Therefore genetic diseases involving genes of larger sizes like Stargardt (ABCA4-6.89kb), Usher (MYO7A-6.64kb), Cystic fibrosis (6.5kb) etc. cannot packaged. To overcome these constraints, strategies like ‘dual AAV vectors’ which can reconstitute split genes by the mechanism of splicing (trans-splicing), homologous recombination (overlapping), or a combination of the two (hybrid) are developed. Our present work focuses on development of dual hybrid AAV vector system for ABCA4 gene and evaluating its efficacy for the therapeutic outcome in the treatment of Stargardt disease. 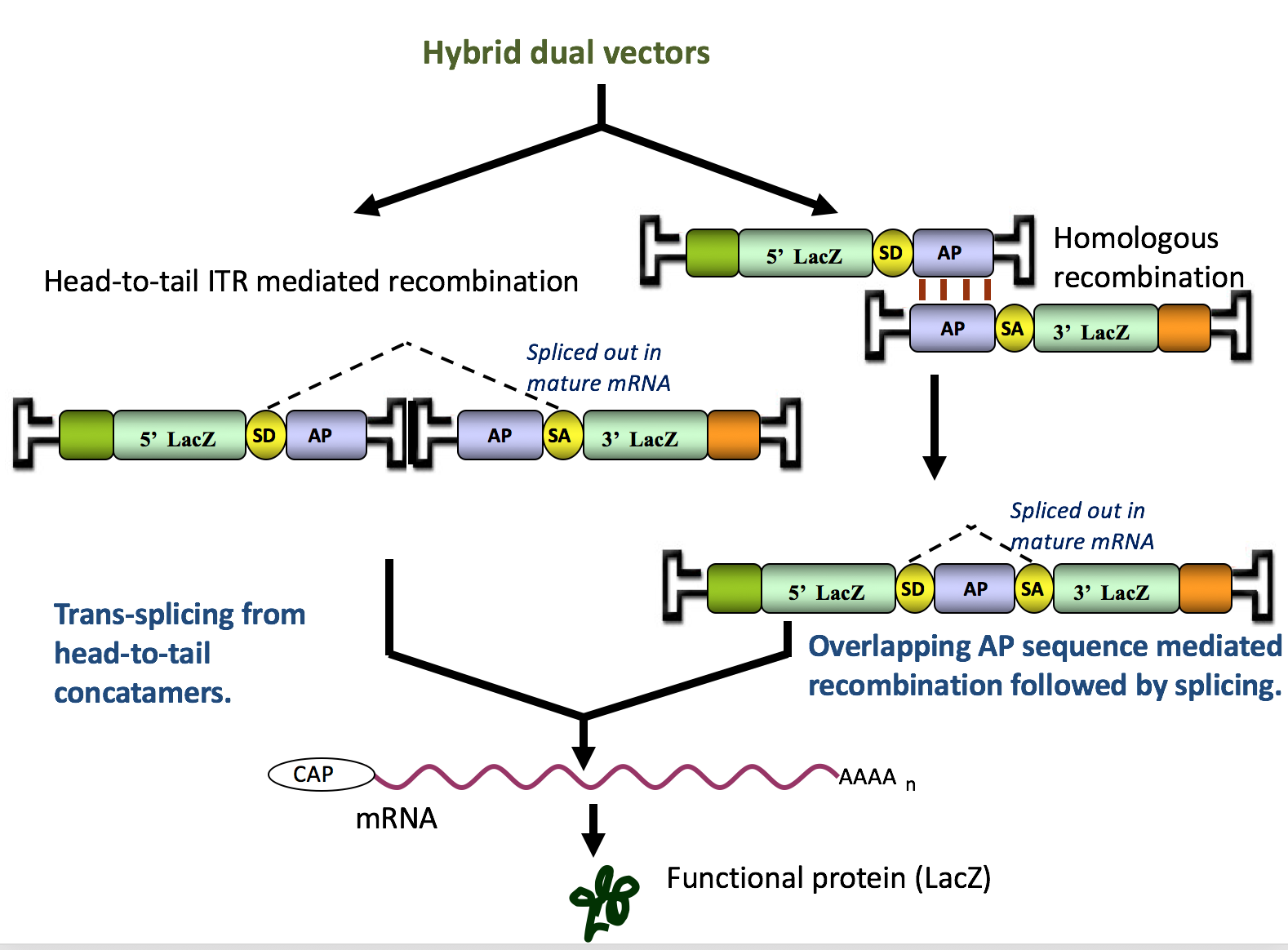